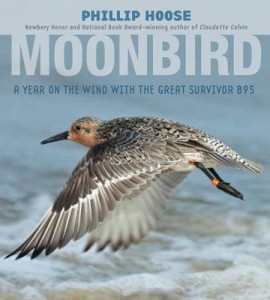 In the summer of 2012, Phillip Hoose, published “Moonbird: A Year On The Wind With The Great Survivor B95.”

Already in its third printing, Moonbird has won or been nominated for nine major awards, received starred reviews from six journals and made seven Best Books of 2012 lists.

Hoose is a National Book Award winning author of ten books. He has worked for The Nature Conservancy since 1977. His previous books include “The Race to Save the Lord God Bird” (about the Ivory-billed Woodpecker), “Claudette Colvin: Twice Toward Justice” and “We Were There, Too!: Young People in U.S. History.” The children’s book “Hey Little Ant,” written with  his daughter Hannah, has sold more than a million copies worldwide. Hoose lives in Maine, where he frequently collaborates with Manomet’s Shorebird Recovery Project Director, Charles Duncan.

After the Ivory-billed Woodpecker book, “I was looking for another bird species or subspecies to write about, a bird type that is in danger of becoming extinct, but one for which there is still hope,” Hoose remembered, in an appendix to Moonbird.

When Duncan suggested Red Knots and B95, Hoose was hooked. He followed the iconic bird on his hemispheric migration for a year and wrote this book that has engaged thousands of readers – many of them young – in the conservation movement.

Please support our work with a donation. Your contribution will help conserve all shorebird species and the vanishing habitats they rely on.

“If you care about shorebirds and the habitats they rely on, you can’t do better than supporting Manomet’s Shorebird Recovery Project. It connects, nurtures, prods, and fertilizes, at a global scale.”

Phillip Hoose, author, “Moonbird: A Year on the Wind with the Great Survivor B95.”

©2013 Fund for the Moonbirds. Photography by Bradford Winn unless otherwise noted.